The NPR Science Friday Book Club meets this week to talk about their fall pick: "Surely You're Joking, Mr. Feynman!" : Adventures of a Curious Character. Physicist Lawrence Krauss joins the club to discuss Feynman's contributions to physics and his unconventional life.

You can listen in on the discussion (or read the transcript) at the NPR website.
Posted by Friends of Tuva / Feynman.com at 21:36 No comments:

As reported in The Hollywood Reporter, Variety, and many other sources, the BBC and the Discovery Science Channel are collaborating to produce a docudrama about the Rogers Commission's investigation of the Challenger space shuttle disaster.  Feynman will be played by William Hurt.  More details are available at Televisual but the broadcast is forecast for 2013.
Posted by Friends of Tuva / Feynman.com at 21:22 No comments:

The role of Feynman was originated by Alan Alda in Los Angeles and New York.
Posted by Friends of Tuva / Feynman.com at 20:23 No comments:

Apple Disappoints Us With Their Anti-Science Ad

Apple once enjoyed an image of ultracoolness, of not doing things the way the other guy did them, and of honoring the values of science.   They even invoked the image of Richard Feynman in their "Think Different" campaign,: 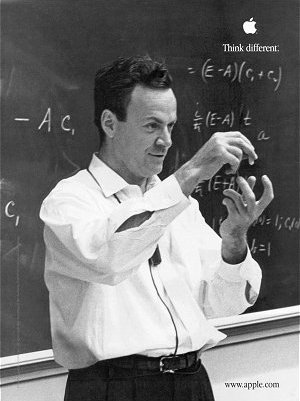 Sadly, it appears that those days are long gone, as evidenced by the recent ad from Apple with it's anti-science overtones implicit in the tagline "Well, I guess the laws of physics are more like... general guidelines".

Yes, it's just an ad, and yes, the people making the advertising have nothing to do with the people designing the product, but it's the sentiment that rankles.  It smacks of disrespect, and it rubs those of us at Feynman.com the wrong way.  It would be different if it were funny --- we're big fans of funny.  But it's not funny, it's simple, and I mean that in an unflattering way - "the device is thinner with more display area" is hardly a conundrum that will baffle anyone.

Ultimately, it comes down to an aphorism once given to me; "if you don't like the advertisement, you're not the target audience".   So it appears while that Apple once went out of their way to woo me (and presumably you, too, if you're one of the five readers of this blog :-) they are no longer doing so, and they are now going out of their way to drive us away.

Posted by Friends of Tuva / Feynman.com at 21:50 No comments:

Sit back and enjoy her video!


The following is quoted from Vi Hart's Youtube channel:
Historical Note: This video is based on a true story. Arthur H. Stone invented the Hexaflexagon and started a flexagon committee with his friends Tuckerman, Feynman, and Tukey (who all later became well-known in their respective fields). Tuckerman invented the Tuckerman Traverse, and Feynman invented Feynman Diagrams (not to be confused with Feynman Diagrams in physics, which is probably why flexagon diagrams are usually not called Feynman Diagrams anymore). The details of their interactions and dialogue, however, are my own invention.
Posted by Friends of Tuva / Feynman.com at 21:34 No comments:

Tuva Online has published a great interview with Kongar-ol Ondar - check it out!
Posted by Friends of Tuva / Feynman.com at 22:07 No comments:

We've created this blog to make it easy for interested people to subscribe and receive irregular postings when news of interest to Feynman fans or Tuva fans is brought to our attention.
Posted by Friends of Tuva / Feynman.com at 21:44 No comments: